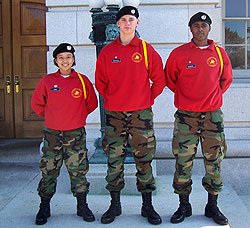 Wisconsin's Challenge Academy offers a route to  success for at-risk teens. On a visit to Madison, Challenge Academy cadet Montez Bowers of Milwaukee said he found out about the program from his cousin. That's not uncommon; since the National Guard sponsored academy began operating at Fort McCoy nearly ten years ago, successful graduates have been among its best advocates. The Academy, said Bowers "get's you back on the right path to success."

Cadets, like Austin Buckles of Viroqua, usually are having problems at school. "I came for both discipline, and for an education," said Buckles. Cadet Darla Yang of Green Bay had a hard time asking for help at her high school, but not at the Challenge Academy. "Everybody's here for the same reason," she said. "You don't feel awkward going up to the instructor," to get help.

The cadets complete a 22 week residential program at Fort McCoy. Each has an adult mentor, something Challenge Academy director Mike McLaren says is a key component; "an additional asset, for consultation, for advice, for guidance." And there are plenty who need that help. According to the Challenge Academy website , one out five high school students in Wisconsin is either a drop out or a habitual truant, a total of some 84 thousand students annually. McLaren says about 75% of Academy participants successfully complete the 22 residential program, with even higher success rates for high school equivalency diplomas and placement in jobs and school.