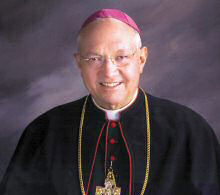 Does a government watchdog have ulterior motives for  denouncing theMadison diocese? The Catholic Diocese is criticized for handing outfliers encouraging people to vote 'yes' in November for theConstitutional amendment banning gay marriage.

Bishop Robert Morlino says he would be remiss if he DIDN'T show hisopposition to gay marriage, and he questions the motive of theWisconsin Democracy Campaign for asking the state Elections Board totake enforcement action against the Madison diocese for failing toregister its activities. “They themselves came out with a strongrecommendation to vote 'no.' They say they're nonpartisan. So I have towonder whether or not their desire to defeat this marriage amendmenthas maybe overtaken their desire to be fair about what the bishop cansay inside his own churches.”

Wisconsin law requires groups that spend more than $25 to support oroppose a state referendum to register with the board. Morlino says hedoesn't have a problem with the law. In fact, he would gladly registerwith the state Elections Board if he was distributing information in away that would require him to do so, but he's not. “I cannot allow thestate to become involved with how I teach my parishioners and mychurches because that curtails our free exercise of religion and that'sa principle that's far more valuable in the long run than any other.”

The Wisconsin Catholic Conference has registered with the state forelectioneering, but Morlino doesn't think it would be a good idea forhis diocese to register just to avoid this hassle. “Well, I wouldn'twant to set that precedent because that means that I somehow have toget involved with the state when I teach the basics of my faith insidemy own churches, and I don't want to give that much. I'd rather fightsomething out in the Supreme Court than give that much because ourfreedom of religion has been eroded terribly.”

NOTE: Morlino says he wants people to know that he loves being inthe city of Madison and the diocese. He loves all of his brothers andsisters in the Lord, and when he speaks out about the truth, he does itout of respect and he offers it with love.