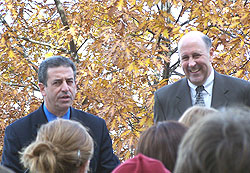 The Green campaign says Doyle hasn't helped students very much since taking office, with nearly 50% in tuition hikes over the past four years.