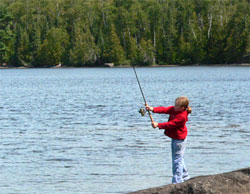 An environmental group says Great Lakes military exercises will violate federal pollution laws. By its own admission, the U.S. Coast Guard says live fire exercises will put seven thousand pounds of lead into the Great Lakes every year, according to Curt Leitz, executive director of Duluth based Citizens for Environmental Enforcement . "To put seven thousand pounds of lead into perspective, all the industries in the entire state of Michigan discharge approximately 4,000 pounds of lead into surface waters each year," said Leitz. He added that his group was formed because of what he calls an "enforcement gap" between what's law and the Environmental Protection Agency's ability to enforce it.

According Leitz, participants in a public hearing held in Duluth after the live fire exercises had already begun, suggested a number of ways that impacts to the lakes might be minimized or mitigated. Leitz said it's his understanding that the live fire exercises have now been suspended, pending completion of a public comment period. "Our hope is that they will not restart the exercises anywhere, until they've complied with federal law," said Leitz.

This is not an issue only on Lake Superior; the Coast Guard earlier this year announced plans to establish 34 permanent zones throughout the Great Lakes.