You are here: Home / News / Halloween comes a long way 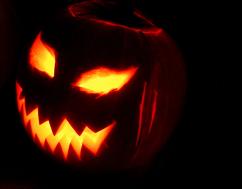 It's time once again for tricks, treats and scary costumes, but how did it all get started? Theodore Pappas, Executive Editor of Encyclopaedia Britannica, says Halloween 's origins can be traced back to the Celtic festival of Samhain , when they celebrated the harvest, the end of summer and the new year. Also, the souls of the dead were most visible at that time and revisited their homes. “The spirits of those who had died that year would actually take care of unfinished business on this day, which is why folks — in addition to celebrating the harvest — tried to protect themselves from these spirits by wearing masks and carving grotesque faces on gourds and lighting bonfires and making animal sacrifices even, on the night of October 31st.”

The jack-o'-lantern has become a popular symbol on Halloween. Pappas says it's tied to an old Celtic Irish legend about an old drunkard known as “Stingy Jack.” He supposedly once tricked the devil into paying for his drinks. “According to the tale, when old Jack died he was barred from both Heaven and Hell and was condemned to wander the earth with nothing more than a lit hollowed out gourd to light his way. And so the tradition from this followed of naming hollowed out gourds and pumpkins … jack-o'-lanterns.”

Paapas says Halloween is one of the most widely celebrated holidays in the US, but it's very controversial, with many schools eliminating Halloween parties in favor of fall festivals. “With the evolution of social sensitivities, that seems to be the direction. I don't think it's going to do anything to killing Halloween as an extremely popular secular commercial holiday. There's an awful lot of money behind it and it's also a lot of fun for a lot of folks.”

Halloween is just one of thousands of topics you can learn more about by visiting Britannica.com