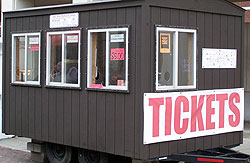 As Madison prepares for its first official sanctioned Halloween on State Street, the city's mayor is hoping to “put the fun back in” the holiday.

Tickets to the fenced-in event are $5 per person, and Mayor Dave Cieslewicz is keeping his hopes up, that the measure of control afforded by the paid admission, fencing, police and security guards will mean a safe celebration on State Street this weekend. He says if the party ends without another riot, it could set a precedent. “I really want to get to a point where Halloween is fun again, and Madisonians accept it, and are actually proad of it,” the mayor told WIBA-AM.

But the city should not be so extensively involved in organizing future Halloween celebrations on State Street, in the view of Alderman Zach Brandon, who says he's worried that the city will be liable for accidents or injuries that can happen with heavy drinking, or for damage to property. “The city's participation in this event has been disconcerting for myself and a lot of other people,” said Brandon.

Mayor Cieslewicz said he's confident the city has done all it could to try to prevent another riot. Part of the strategy will be to head-off a lot of drinking that doesn't start on State Street, but ends up there. “The problem isn't just bars, it's also some of the activities at house parties,” he said. “We'll try to curtail some of those big house parties that get out of hand.”

Some of the Halloween revelry could begin Friday nighht, but most is expected Saturday into Sunday morning.