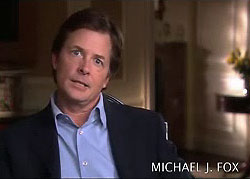 In a new TV ad , Michael J. Fox urges voters to re-elect Governor Jim Doyle.  Shaking from his Parkinson's disease, the actor says Wisconsin has a special place in his heart, as stem cell research was born here and cures for diseases just might be found here. “Governor Doyle has been a champion of stem cell research. He knows the promise it holds and the jobs it can create. Congressman Green has stood in the way of embryonic stem cell research. His votes have set us back.”

Graul says Green did not turn his back on anyone, in fact, he wants to see Michael J. Fox get better. “From the start Mark Green has made it very clear he supports stem cell research. He has helped get funding for the very stem cell research that is happening today in Madison. The ad just does not tell the truth about Mark Green's stance on stem cell research.” Graul explains Green does not support human cloning, nor should tax dollars be used to destroy human embryos.

Rush Limbaugh also questions whether Fox takes his medications prior to doing TV appearances or speaking engagements, in order to exaggerate his tremors. Fox political advisor in Milwaukee John Rogers says that's an extraordinarily sad statement and, he says, Parkinson's is a very difficult disease to moderate with medication. “I think it's a shameful statement.” He adds, “Anyone who understands the disease knows that it's the meds themselves that create the dyskinesia.”

Fox had toured the Waisman Center in Madison with Governor Doyle almost two years ago, calling the facility the “gold standard” in stem cell research. Fox was diagnosed with Parkinson's disease in 1991.