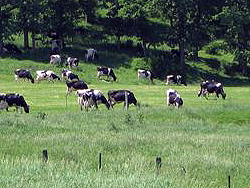 The state loses nearly 24,000 acres of farm land every year and State Agriculture Secretary Rod Nilsestuen says a balance needs to be found between the needs of farmers and developers across Wisconsin. The Secretary says local governments need to have more tools in order to protect the land that provides much of the income for rural Wisconsin.

A special state task force has been working on new policies to help control growth. Nilsestuen says their ideas include creating ag enterprise zones and overhauling the state's outdated Farmland Preservation Act. With Wisconsin's population growing, Nilsestuen says we can't stop the need for new development. But he says we can put tools in place to protect farm land. The task force is expected to make official recommendations early next year.