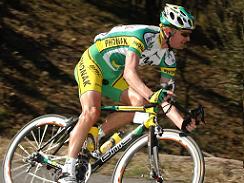 A world champion comes to our state Friday to help fight for a “More Bicycle-Friendly Wisconsin.” The 2006 Tour de France champion aims to raise money for bicycle advocacy and education efforts in the state. Dar Ward of the Bicycle Federation of Wisconsin says Floyd Landis will be at Saris Cycling Group's annual Gala and Fundraiser in Madison, but stresses the proceeds will benefit the Federation, which supports statewide efforts. “The Bicycle Federation of Wisconsin is a statewide organization and the funds that we raise at the event on Friday will be used for advocacy statewide, particularly to work on the shortfall in state funding for bicycle pedestrian facilities.”

In the wake of recent news that millions of federal dollars are being reallocated to fund state highways rather than bike and pedestrian paths, Ward says she hopes Landis' appearance will generate a lot of money. Despite a cloud of suspicion over Landis' alleged doping violations during the race, Ward says they are just glad to have the full support from someone of his caliber. “Well, it's hard to know, I mean, any time you can get someone of this high of an international profile it's great to have them stop by. You know, he's doing this of his own charity work.”

Landis grew up in a strict Mennonite family, but was determined to race his bike, endured severe hip pain, and came from behind to be the first person to win the Tour de France since Lance Armstrong bowed out of the competition after winning it 7 times.

NOTE: Landis is the third American to win the Tour after Greg LeMond and Lance Armstrong. Because of the doping allegations, Tour de France organizers have said they no longer consider Landis the champion, but he has not yet been officially stripped of that title.