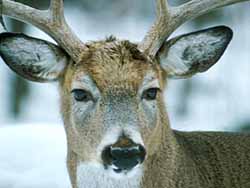 Antlerless deer registrations for opening weekend are up over last year. But are they enough? Preliminary numbers show hunters harvested just over 167,500 deer, with about a 20% increase in the take of antlerless deer. “That's a good thing,” says DNR big game specialist Keith Warnke. “But you need to temper that . . with the fact that this year there was no October antlerless gun season.”

Warnke says the October gun season could have resulted in a harvest of 70,000 antlerless deer, or more. Opportunities remain to make up that number. “It's totally up to the hunters to go out in December, in the rest of the regular nine-day, during the muzzleloader season and during the December antlerless-only gun hunt, and take those antlerless deer,” says Warnke. “It could happen, and it's hunters who make it happen.”

The DNR has tried a variety of methods to encourage taking antlerless deer, which is key to managing herd size, and combating Chronic Wasting Disease . Warnke says it seems to be paying off. “I don't think that, as a whole, hunters are resistant harvesting antlerless deer,” he says, adding that the challenge for the DNR is to provide a season structure that provides enough days of hunting to kill enough antlerless deer.