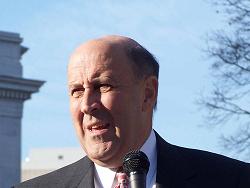 At his first press conference in nearly two week, Governor Jim Doyle promised renewed efforts on ethics and campaign finance reform. On ethics reform Doyle said he's ready to sit down with legislative leaders from both parties, "to find a consensus on a bill that we can actually get passed, that will have real teeth in it."

What would that bill look like? Doyle points to SB-1, which would have combined and strengthened the state ethics and elections boards. "There was plenty of votes for that bill last time around," the governor said. "I want to see us get to a bill that actually gets passed, and I would think that provides much of the guidance to where we should be." Asked about a potential effort by Assembly Republicans to attach an amendment to the ethics bill, requiring a photo ID to vote in Wisconsin, Doyle said that fight has " already been fought ."

The bill's author, Republican state Senator Mike Ellis of Neenah, said he was glad to hear Doyle supporting the bill. But, Elllis said he's afraid the bill will be "watered down" by members of his own part in the state Assembly. "Am I optimistic that they would actually pass a tough enforcement bill? I don't know" said Ellis. " I would hope they would."

Doyle also said he'll push for campaign finance reform, though not publicly financed campaigns. And he said reigning in so-called "issue ads" will be a top priority. "We just won't pretend anymore that these are issue ads. We will declare that they're a political ad. And if you just said that, anybody that did it (aired such ads) would have to comply with our state elections laws."

Doyle also commented on the state budget, and an assertion by his campaign opponent, Republican Mark Green, that Doyle kept the extent of the state's budget challenge. "It's not true, the campaign's over," said Doyle. "Let's move on." Projections released from the state Department of Administration this week indicate the state faces a budget deficit of $1.6 billion. "The budget is balanced," said Doyle. "This budget will end on June 30th of this year, and the budget is balanced. Now we face a challenge as we move into the future. We still don't know what the revenue projections will be. That's something we're going to find out." Doyle said he would once again balance the budget without raising taxes.

What about a cigarette tax hike, to help fund health care in Wisconsin? Doyle says he's willing to consider that — if it can be proved that the money would go towards health care. Doyle says he can't support the 25-dollar increase in the car registration fee the D-O-T proposed three days after the election. "I think that's too high," he said, noting that in the last budget he proposed a ten dollar increase. "That seems to me to be more reasonable."