You are here: Home / Politics / Govt / Falk will wait for official results in AG's race 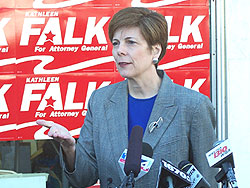 Democrat Kathleen Falk is taking a "wait and see" approach before deciding if she'll concede the race for Attorney General. Even though initial results show Republican J.B. Van Hollen winning the election by about 9,000 votes, Falk says she'll wait until the statewide canvas is done before making a decision on conceding. She says that's the wise course of action, given the closeness of the race. Falk says no decision has been made yet on if her campaign will ask for a recount.

Falk spoke with reporters Thursday morning in Madison, her first appearance since election night. Falk says her opponent understands the decision. She has talked to him and wished him luck, but stopped short of conceding the race to Van Hollen.

On the closeness of the race, Falk says special interest money played a big role. She points to almost $2.5 million in issue ads run by groups leading up to the election, most of them negative.