You are here: Home / Politics / Govt / Green promises to make Wisconsin better, like Tommy did 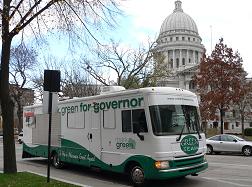 The GOP governor hopeful stumps in Wisconsin's capital city, and he's asking for your vote. Republican gubernatorial candidate Mark Green is confident he can move into the governor's mansion, but he needs your support. Green says Wisconsin is full of great people, and he wants to make the state great again. “Our people are good and decent and honest and hard-working, innovative, resourceful, hopeful. You and I know that we do not have a people problem in Wisconsin. We have a leadership problem. And that's what this election is all about.”

Green says Governor Jim Doyle vetoed too many bills, including a property tax freeze and photo ID requirement for voting. “Jim Doyle has mistaken moving this state forward with moving it toward his friends. And you can see it in his vetoes. He's vetoed more bills than any governor in 42 years.”

Green promises to make things better, like a former popular governor did when taxes were rising and businesses were leaving the state. “I campaign with Tommy Thompson because he reminds us of what was, what can be and how we're falling short. That's why Tommy's important. Twenty years ago you and I saw this state be in a remarkably similar situation.”

Green says if you are satisfied with the status quo, he's not your guy. But, if you're looking for a new day, with new leadership, lower taxes, lower UW tuition, he's your guy.