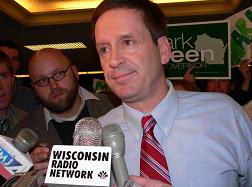 Mark Green takes his so-called "Let's Make Wisconsin Great Again tour" to Wisconsin's political nerve center. In the birthplace of embryonic stem cell research, Republican gubernatorial candidate Mark Green says adamantly that embryonic stem cell research WILL continue in Madison when he becomes Governor. "Of course it will. You know it will. I mean, folks, we've talked about this over and over again. Of course it will."

While talking about healthcare, Governor Jim Doyle had criticized Green for being too closely tied to big drug companies. Green responds by saying the governor has failed the people of Wisconsin as the cost of healthcare is skyrocketing. "This is a governor who, under his watch, has seen the number of uninsureds go up. There are more people in Wisconsin without health insurance today than there were four years ago. That is a failure on the part of the Doyle Administration. Under Jim Doyle's watch health care costs are rising faster than the national average."

Green talks about economic development, taxes and he slams Doyle for increased tuition at the UW. He says "Anyone can go to the University of Wisconsin except if you're from Wisconsin." Green says he's not campaigning with former governor Tommy Thompson to raise his standing in the polls. He's doing it "because he reminds us of what was, what can be, and how we're falling short." Speaking of polls, Green says he just can't pay attention to all of them. "I think our viewers and readers are suffering from death by 10,000 polls. A poll a couple days ago said we're up. The race is close. It has been close for months. It's gonna be close right through election day. I think all the momentum's on our side. I think we're doing great. I feel good. We're gonna win on Tuesday night."

Tommy Thompson will join Green in Fond du Lac on board the "Green Machine" RV on Saturday.