You are here: Home / Education / History buffs are fired-up for Lunghi 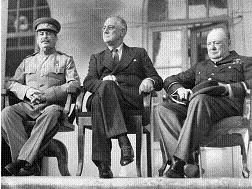 Historians and general history buffs statewide are salivating for an upcoming event at the state Veterans Museum . In addition to its nationally recognized exhibits and educational programs, the award-winning Wisconsin Veterans Museum takes pride in its variety of speakers, and Friday’s guest is no exception. Museum Director Dr. Richard Zeitlin, PHD, says wartime interpreter Hugh Lunghi is of huge interest to anyone who likes history. “Hugh Lunghi was the British translator who translated from Russian to English at the Big Three wartime conferences of Tehran, Yalta and Potsdam during 1943 to 1945. So he sat between Churchill and Stalin and alongside President Roosevelt during those momentous occasions.”

You can read all you want about US President Franklin D. Roosevelt, Joseph Stalin of the Soviet Union and Prime Minister Winston Churchill, but Zeitlin says you now have a rare opportunity to meet someone who has had firsthand experiences with all three major leaders. “Hugh Lunghi is the last survivor of the wartime conferences. He had extensive contact with Churchill as well as the other British generals and the American diplomats who were present at those famous occasions.”

Zeitlin explains the historical significance of the Big Three conferences, where Lunghi translated at the historical event. “The wartime conferences discussed how the victors — which is to say, how the United States, the Soviet Union, and England — would divide and operate the world after the defeat of Germany and Japan.”

The public is invited to attend the free event at the state Veterans Museum in downtown Madison, but get there early because the seats will fill up quickly.

NOTE: The Wisconsin Veterans Museum in partnership with the University History Department will host Mr. Lunghi at noon on Friday, November 3rd, on the second floor education center of the museum in downtown Madison.