You are here: Home / Politics / Govt / Lawton: Dems give people what they want 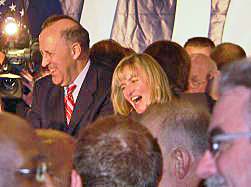 The first woman elected to the office of Lt. Governor in Wisconsin gets the job for another four years. Lt. Governor Barbara Lawton has a simple answer as to why she and Governor Jim Doyle kept their jobs. She says the Democrats are leading the state forward, and that's exactly what the people of Wisconsin want. “We're so excited that the people of Wisconsin agree that this is the right way to go, that we're leading in the right direction.”

Lawton admits the celebrity endorsements they had were great, but she says their record stands on its own. “Well I think that we have a proud record to boast, of fiscal responsibility and addressing how we bring the people of Wisconsin together.”

Aside from Barak Obama, the popular US Senator from Illinois, former President Bill Clinton and actor Michael J. Fox were among the celebrities campaigning in our state for Democrats. Lawton says the people of our state voted for the Democrat vision of economic growth that builds on good health care, education and new jobs.