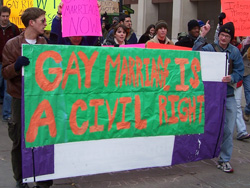 Vowing that their fight for equality is not over, UW students and others protest Wisconsin's defense of marriage amendment at the Dane County Courthouse and the Capital on Friday. Protesters rallied at UW's Library Mall, where Nikki Baumblatt with Madison based Outreach addressed the crowd. "It's been ten days since the people of Wisconsin decided to brand our constitution with discrimination," she said. "Ten days since many came to the realization that others view us a second class citizens." And while Baumblatt said she's disappointed with that outcome, she added that "the glass is half full," because opponents of the amendment are now "a political force."

At the county clerk's office, a plan to have same sex couples apply for marriage licenses ran into a problem; Dane County Clerk Robert Ohlson was out for the day. Protesters remained in the corridor outside the clerk's office for about half an hour, before moving on to the Capital office of marriage amendment author, Representative Mark Gundrum — who was also not in.