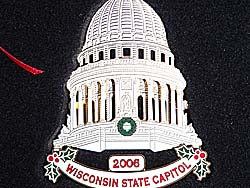 The third annual limited edition State Capitol Ornament is on sale now. Each year, the ornament focuses on a certain aspect of the historic building, with this year's decoration highlighting the majestic capitol dome. Wisconsin Historical Society Museum Director Ann Koski says, structurally and architecturally, our dome is superior to the others. "It's one of the largest by volume in the entire world. But it's also clad with granite."

At 16 bucks a pop, they hope to raise $10,000 dollars for the Capitol Restoration Fund, which Koski says helps to maintain our capitol for future generations. "It is an absolute jewel for the state of Wisconsin."

Former State Treasurer Cate Zeuske ordered 25-hundred ornaments this year, and expects them to sell out quickly. "So I would encourage shoppers for the holidays, that if they have family and friends or business associates, to buy early because when the edition's gone, it's gonna be gone."

Zeuske says buyers also get a beautifully detailed gift box and a brochure giving some historical information about the Wisconsin landmark. Ornaments are available at select locations in the state or online wisconsinhistory.org . The first ornament depicted the entire capitol building , the second featured  Wisconsin — the statue atop of the dome. Those two ornaments raised more than $12,000 for the fund. The ornaments are made in America. (At Chem Art Company of Rhode Island, which as also makes the annual White House ornament).