You are here: Home / Politics / Govt / Roll out the voters: AARP promotes getting out the vote in Wisconsin. 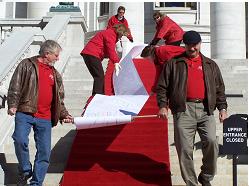 AARP's Jim Flaherty says Friday's event on the Capitol steps in Madison unveiled the organization's "Voter Roll of Honor" — a giant roll of paper with some 1300 signatures of people committed to vote on November 7th.

Those signatures were gathered over the course of AARP's five week long tour with its Voter Express Van — stops in 19 Wisconsin communities where voters had a chance to find out about the candidates. How are 55-plus voters feeling heading into the election? Flaherty says all the negative campaigning has them feeling disenfranchised, but not disillusioned.

AARP is nonpartisan, but surveyed Wisconsin candidates about issues its members care about; things like tax reform, Medicare Part D and Seniorcare.