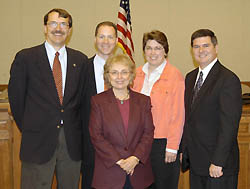 State Senate Democrats are prepared to take over the majority. Members met Thursday at the Capitol, for their first caucus in the majority. Senators approved State Senator Judy Robson's (D-Beloit) move from minority to majority leader. In accepting the nomination, Robson said she will work hard to improve the Senate and thanked members for their hard work in gaining control of the chamber. Robson said voters gave Senate Democrats the gift of majority control because their message resonated with the public.

Democrats will officially take control when the new legislature is inaugurated on January 3, 2007.