You are here: Home / Military / Veterans get help kicking butts 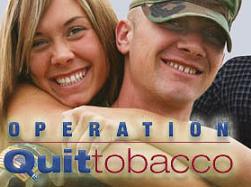 A new program aims to help veterans quit smoking. Veterans might find it easier to put down those smokes and chewing tobacco with the help of Operation Quit Tobacco. "A program designed to help Wisconsin military personnel who use tobacco and want to quit … to do that successfully," says Dr. Michael Fiore. "Whether you're active duty, reservists, National Guard, or a veteran, if you're ready to quit we're ready to help."

Dr. Michael Fiore (M.D.), director of the UW Center for Tobacco Research and Intervention , says up to 50% of returning Iraqi veterans use tobacco, which is a higher rate than when they went into the service. And Fiore says the health implications are staggering. "We saw a real peak of tobacco use particularly among veterans that returned from WWII. That was then followed two decades later by an epidemic of lung cancer."

Operation Quit Tobacco is designed to ensure the new group of veterans doesn't suffer the same fate as earlier vets. The amount of Americans who smoke is 24%, while the rate among veterans is 34%. Fiore says veterans can call 1-800-QUIT-NOW, to get a combination of medication and coaching to help them kick the habit. Smoking remains the leading preventable cause of premature death in the U.S.

NOTE1: The UW Center for Tobacco Research and Intervention and its partners in this endeavor – including the  Wisconsin Department of Veterans Affairs , Department of Military Affairs and the William S. Middleton Memorial Veterans Hospital in Madison – will get the information to veterans through newsletters, websites, brochures, pamphlets, posters, mailings to community based clinics, and news conferences.

NOTE2: Fiore says they do have efforts to target other groups in a similar method as this veterans' initiative, to address their high rates of smoking. Those groups include the uninsured, and those on Medicaid and BadgerCare. The rate of smoking within those groups approaches 40%.