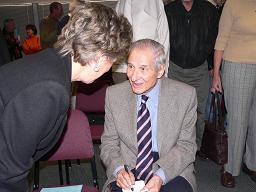 He's the last survivor of the wartime conferences, and Friday he took time to share his experiences in Wisconsin's capital city. Wartime interpreter Hugh Lunghi was only in his early 20s when he translated at the Big Three conferences with Franklin Roosevelt, Joseph Stalin and Winston Churchill. He says he didn't realize at the time that those meetings (between the leaders of the United States, Soviet Union and the United Kingdom) were very historic occasions. And, he says, it'd be neat to have that job now, using the wisdom and experience he has acquired with age, but going back means he'd also have to re-live the war and the suffering that went with it. "The events that I was present at — the historic ones — yes I would, but of course you can't take them out of context. And I think, now of course, as you were saying, with the hindsight of age and so on, one would realize their importance, which I didn't to begin with."

While translating words, facial expressions and other body language were important, too. After all, when talking with major world leaders about war, there's no room for misinterpretation, but Lunghi says there were sort of safeguards in place. "The interpreter from each side — the interpreter s from each side, could be more than one at a single meeting — would help each other. If not help, would point out where the other one was wrong. Usually in a friendly way, very occasionally in a hostile way, and then you'd have to sort it out."

Lunghi told an attentive crowd at the Wisconsin Veterans Museum  that he was taken aback by the appearance of President Roosevelt when he arrived at Yalta. "He looked quite appalling. He looked, his face was waxen. His cheeks had dropped in and he was inclined to stare ahead, which actually he did in the conference."

In light of current events, some suggest we are approaching WWIII. Lunghi agrees that the world is dividing. "Well, it's possible. I think we are standing on the brink. I don't think actually immediately on World War III, but depending on the way certain countries develop … there's the nuclear threat, which is real."

Lunghi appeared at the State Veterans Museum in Madison on Friday. (The Big Three wartime conferences include Tehran , 1943;  Yalta , 1945; and Potsdam , later in 1945 after Roosevelt's death.)