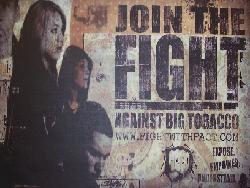 The group Fighting Against Corporate Tobacco is launching a statewide ad campaign in movie theaters this week. Luke Witkowski, a spokesman for the group, says FACT is a youth led empowerment movement against the tobacco industry. FACT youth picked the topics of the commercials and wrote the scripts. Witkowski says the goal of the ads is to get the message out to teens about the lies tobacco companies tell, and to also recruit their help.

The spoken word ads were written by Milwaukee-area student Martinez White. He performs the ads, while other teens star in them as well. He says he wants teens to understand they can easily get involved in initiatives like this.

The ads will also start airing on television and radio stations next month, and will run through January. Wisconsin's Tobacco Control program is funding the ad campaign.