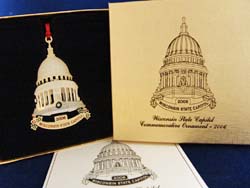 There are just a few more shopping days until Christmas day. However, there's still time to pick up a limited edition 2006 Wisconsin Capitol ornament. “Yes. Absolutely. We're thrilled that we still have ornaments available.”

But not for long! Former Wisconsin State Treasurer Cate Zeuske , who spearheaded and organized the ornament project, explains this is the third year they've created a special ornament to raise money for the Capitol Restoration Fund, and this one's going fast. “This year many people have said it's really their favorite ornament. It's a limited edition. We only had 2,500 actually made — produced — and we're down to, I think, about 500 left.”

The collector's item is available at a few locations in the capital city, or you can purchase it online at WisconsinHistory.org 's virtual gift shop. Zeuske says in the past two years, they've raised over $12,000, and this year they're hoping to add another $10,000 to help maintain our state capitol building. “This is a non-profit effort. All the proceeds go to the state Capitol Restoration Fund. and that is of course to keep our beautiful capitol as beautiful as possible.”

Along with the 2006 Wisconsin Capitol ornament, Zeuske says you'll get a beautifully detailed gift box and an informational brochure, detailing the history of the Wisconsin landmark. Zeuske says they expect to sell out by the end of the year.

The first ornament depicted the entire capitol building, the second featured Miss Wisconsin — the statue atop of the dome. The ornaments are made in America. (At Chem Art Company of Rhode Island, which as also makes the annual White House ornament).