You are here: Home / Military / Pearl Harbor attack, 65 years ago 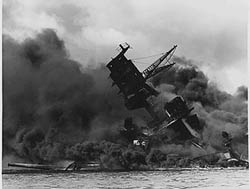 "Air raid on Pearl Harbor. This is not a drill." That was the message 65 years ago today.

The day after the surprise attack on the United States Naval Base at Pearl Harbor , President Franklin Roosevelt called December 7, 1941 " A date which will live in infamy ." Wisconsin Department of Veterans Affairs Secretary John Scocos reflects, "On December 7 th , 1941 Japanese armed forces launched an unexpected and devastating attack on the military base at Pearl Harbor in Hawaii, spurring the United States entry into WWII ."

Scocos explains when the Japanese warplanes bombed the quiet waters of the Pacific; our soldiers were caught off guard. "Sailors found themselves fighting for their lives amid blazing oil slicks. Despite the scenes of devastation that confronted them, brave men manned their battle stations and began to fight back. Many would never survive to see the next day."

Scocos says this greatest generation of soldiers did not think they were committing acts of heroism, they only believed they were doing the right thing by serving our country. "In all, more than 2,400 Americans died that day and close to another 1,200 were wounded."

Scocos says he's hopeful that the new US Secretary of Defense will come together with the new Congress to help meet the challenges in the middle east that are going on right now with the war on terrorism , and to help unify all Americans just as they united during WWII.

Lasting three years and eight months, the Iraq war has now surpassed the length of WWII.