You are here: Home / Weather / The snow was expected but the blizzard was a surprise 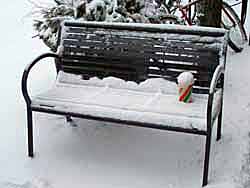 Once the snow finally stops residents in the southeastern part of the state will have to start digging out.

Most people knew they'd see some snow but the blizzard warning issued early this morning for Racine and Kenosha counties came as a surprise.

Tom Karkow with WRN affiliate WRJN in Racine says most people were ready for a foot of snow after it was all done but the blizzard conditions could produce more.

Snowfall was heavy elsewhere in the southeast. Milwaukee schools closed for the first time in 9 years but Pat Rowe at the Milwaukee airport says crews kept at least one runway open all morning.

Some planes were landing and taking off, some flights were cancelled and there were delays but most of those delays were caused by severe weather at other Midwestern airports where airlines cancelled morning flights last night.

Passengers were notified and rebooked which meant no crowded terminal full of frustrated passengers this morning.