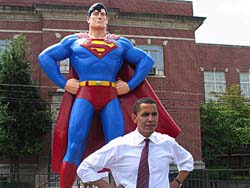 Illinois Senator Barack Obama starts the ball rolling for a Presidential bid by setting up an exploratory committee. What are his chances in 2008?

"When people in a party aren't particularly happy with the front runner, they start looking for somebody to grab onto," says UW political scientist Charles Franklin

And for the moment, according to Franklin, that's Barack Obama, who Franklin says is today's alternative to Hilliary Clinton. But the tough scrutiny is yet to come from inside and outside the party, and Franklin says that's where Obama's inexperience may come out.

Conservative talk show hosts such as Rush Limbaugh have already made a point of using Obama's middle name: Hussein. And there's already been some hesitancy from other African-Americans. "His father is African, but his experience growing up in Hawaii us not the same as most African-Americans," notes Franklin. For now though, Franklin says Obama has the right message at the right time. "He manages to speak to Democratic ideals . . but without seeming to much the old line Democrat." And while it seems way too early to be thinking about the 2008 Presidential campaign but Franklin says candidates are declaring now for one reason: the need to raise money.