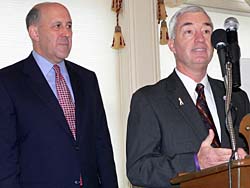 As the governor proposes a three-part anti-smoking initiative for the state, one cancer survivor stresses its significance. Lung cancer survivor Paul Decker from Hartland, Wisconsin, had no reason to be victimized by a smoking disease. "Ten years ago when I was in for a routine physical, they found a mass on my right lung. They didn't know what to make of it for one reason. I had never used tobacco products. I had never smoked."

It was during surgery the doctors found out the mass was cancerous. Decker says they had to remove the entire right lung, he endured chemotherapy and radiation, but was very lucky to survive with such extensive body damage. Decker supports Governor Jim Doyle's statewide smoking ban, $1.25 cigarette tax increase, and the expansion of smoking cessation programs. "The governor's proposals are needed, wanted and can be utilized in this state to help us save lives, save money, but more importantly, save a lot of suffering."

Doyle says we've come a long way in protecting our kids from being exposed to tobacco products, matching public and private funding together to mount an aggressive anti-smoking campaign, but he says there's still a long way to go. "You know younger people don't even remember this stuff but they had to take down the billboards, they had to get rid of the vending machines, and they had to send Joe Camel into retirement."