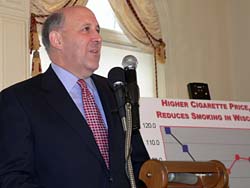 If the governor has his way, nobody will be smoking in our state. Governor Jim Doyle says he wants to give adults a reason to quit smoking and he wants to prevent kids from lighting up in the first place. So, he's asking the legislature to pass a statewide smoking ban . "And it will be a ban on smoking in all public buildings, in all workplaces, in all restaurants and in all taverns."

Also, as part of his budget plan, Doyle proposes a tax increase of $1.25 per pack of cigarettes, bringing the total tax to $2.02. The current tax is 77-cents. Why the huge hike? Doyle says it's clear to him that in order to drive down the number of people smoking, there really needs to be a shock on the price tag. "Tobacco companies for years had agreed to 10-cents here and 15-cents there because frankly they made a little bit more money out of it and it really didn't have any effect on smoking rates. A dollar and a quarter, I think everybody will agree, will have a very, very sharp effect on smoking rates."

Doyle says the money generated from that tax will pay for the cost of tobacco-related illnesses. The governor also wants to expand smoking cessation programs. He says it's obvious in what direction the idea of public smoking is going. The sooner we move in that direction, he says, the less human suffering there has to be.