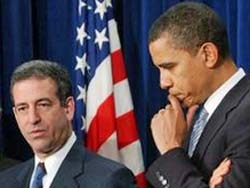 The U.S. Senate is set to consider lobbying and ethics reforms. Wisconsin Democrat Russ Feingold is front and center, in a renewed Senate effort to correct some of the abuses which came to light in the Abramoff scandal. "We had a hell of a scandal, but we still weren't able to pass a bill that did the job," Feingold said of a measure which passed the Senate last year, but which he and several others did not support because, in his words "it wasn't sufficient."

Proponents say this Feingold-Obama bill improves substantially on the lobbying disclosure and ethics bill that the Senate passed nearly a year ago. It would include a ban on the use of corporate jets in Senate campaigns, something which Feingold said "sticks in the craw" of constituents. "It also has a corrupting influence," said Feingold. "When a lobbyist is in that plane with you, he or she has all kinds time to lobby you, bend your ear, schmooze you, whatever you want to call it." Senate debate on amendments to the new bill began Monday and could last up to two weeks.