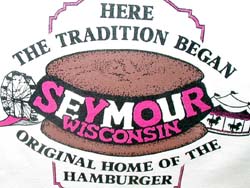 State lawmakers are standing up for Wisconsin's claim to hamburger history. Mount Horeb has its mustard museum, Colby has its cheese, and the city of Seymour in Outagamie County is the birthplace of the hamburger . Or is it? Communities in Texas and Connecticut have conflicting claims on the hamburger, according to Representative Tom Nelson . “Clearly on both counts we have them beat,” says Nelson. That's because “Hamburger Charlie” Nagreen served the first hamburger in 1885 at the Outagamie County Fair. Nelson says he spoke with Seymour mayor, Harold Pingel. Nelson is proposing that the Wisconsin Legislature pass a resolution, recognizing Seymour's claim.