You are here: Home / Education / Hmongs want respect for role in Vietnam 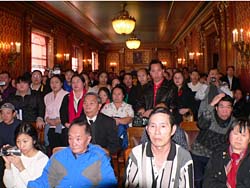 Several Democrat lawmakers are reintroducing the Hmong Migration Education Act . Principle author Donna Seidel (D-Wausau) says she wants Wisconsin school districts to be required to teach our kids about how and why the Hmong population came here. She hopes to create an environment in our state of mutual respect and tolerance. "Our hope is that this legislation will create a better understanding of the Hmong's heroic role and enormous sacrifice in support of America's military during the Vietnam Era."

ChaSong Yang, Executive Director of the Sheboygan Hmong Mutual Association, says Hmong children in the US often question their parents about whether the Hmong really helped the US government during the Vietnam War, because it's not mentioned in the US History books. Also Yang says this measure will strengthen the relationship between the Hmong and the general public. "Because the Secret War of the United States government has been silent too long. It's a time for us to give the proper respect to these wonderful freedom fighters. It's time for us to set the record straight in our history books in the schools that the Hmong Secret War in Laos was true and real."

Yang says, because of their trust and loyalty to the US government, the Hmong have suffered a great deal. He says it's estimated that more than 20-thousand Hmong solders were killed in the Vietnam War, and many more died trying to escape the country in 1975. Over 600 people from Hmong communities statewide convened in Madison for this announcement. (They crowded the Assembly Parlor and spilled out into the hallway). Seidel says today there are more than 50,000 Hmong in our state.

Representative Fred Kessler (D-Milwaukee) says they were going to offer this bill — AB-314 — later this year, but were sort of forced to bring it up now because of the recent murder of Cha Vang near Peshtigo.