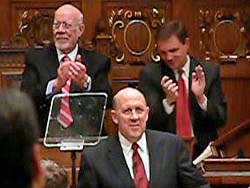 Assembly Speaker Mike Huebsch (R-West Salem) likes what he heard in the governor's State-of-the-State address , but he says it's easy to tout the good things about our state because the state of the state is very strong. Governor Jim Doyle has a wish list for everyone, including healthcare, jobs, education, environment, and energy. Huebsch says that's "remarkably ambitious."

"I think the governor's State-of-the-State speech tonight was quite ambitious. He has outlined a number of programs that we'll be interested, frankly, in how he intends to pay for those of course. But we also recognize that right at the top, he said and he recognize that we must cut taxes for people. That was the first standing ovation of the evening."

Huebsch says our lawmakers continue to promise so many things to so many people, but continue to underfund all of those programs. That's something that needs to be worked on without breaking the backs of the taxpayers.