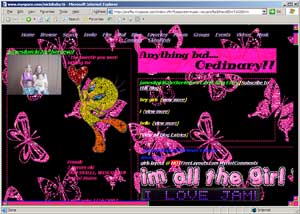 Rock County Sheriff's investigators are looking at internet activity by one of the three family members found murdered south of Janesville. Sheriff Bob Spoden say one of the victims, 17-year-old Nicole Lentz, had a profile on the popular teen site, MySpace.com , and that someone was logged onto her account as late as the day the bodies were found. Spoden says they're trying to determine if the site is connected to any potential suspects in the case.

38-year-old Danyetta lentz, her daughter Nicole and 14-year-old son Scott were found slain in their home last Friday. Investigators say they don't know whether there was a single assailant or multiple attackers. However, they have ruled out Danyetta's ex-husband and Nicole's boyfriend as supsects. Spoden is confident DNA collected at the crime scene is connected to the killer or killers. The Sheriff says the state crime lab is offering whatever support is needed to complete the investigation. [ WCLO's Stan Stricker contributed to this report. ]