You are here: Home / Politics / Govt / Lasee: Nice speech, who's paying for it? 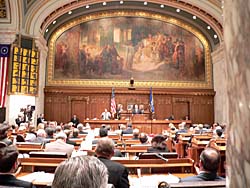 One lawmaker is upset with what he calls the governor's multi-billion dollar wish list.

Great speech, says State Representative Frank Lasee (R-Green Bay), but who's going to pay for it? "I'm for all kinds of the things the governor talked about but we have to get our fiscal house in order."

Lasee says it is poor leadership when we're carrying a 'funny money' deficit. "We're one of the few states that are running deficits because we borrow too much, have a low bond rating," he says, "and we cook our books like no other state in the country."

The Green Bay Republican wants to get Wisconsin's fiscal house in order. Lasee says we need to live within our means, but that will be difficult when the governor proposes a lot of new spending. Lasee says he wants to help people, too, but we can't do it by loading up the middle class. "I'm sorry folks. There just aren't as many rich people as there used to be here and we have less than other states because they are leaving! We are chasing them away. And that means the middle class taxpayers have to pick up the slack because we don't tax poor people and we give poor people more than any other states."

Since the state doesn't have enough money to pay for the programs, Lasee says we'll probably have to raise fees. "We're going to see a plethora of fee increases and budget shifts and robbing different funds and probably borrowing from the future again like we've done in the past budgets all to spend beyond our means and load it up for future taxpayers." He says, "That's wrong and irresponsible and the governor's leading the effort in that direction."