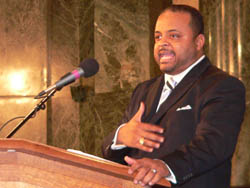 Governor Doyle tells the crowd that the future of this state depends on diversity and finding talent everywhere. "You know what? It's amazing what happens when you look for talent everywhere. I am proud that my administration has had the most diverse cabinet in the United States. And I am proud that as I set forth on a second term that four of our cabinet secretaries in our most important positions are African-American."

Guest speaker Roland S. Martin (pictured) says people need to follow the lead of the slain political activist and not just talk about it. Martin says words are meaningless if there's no action. "See we've got to redefine how we look at King because today you've got politicians who will easily quote King but will not support the positions he advocated."

Martin says you shouldn't just go to a ceremony once a year; instead you need to take action. You need to ask yourself what you can do to better change the condition of your city, state, nation and the world. "And let me say this. If you choose not to make a decision, that's fine. Just do me a favor. Get the hell out of the way because the rest of us got some work to do."

Dr. King was assassinated in Memphis, Tennessee on April 4, 1968. Martin Luther King Day was established as a holiday in the United States 21 years ago, in 1986. 1964, King became the youngest man to be awarded the Nobel Peace Prize.