You are here: Home / News / Nanotechnology gets GOP support 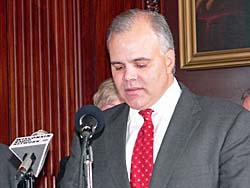 Some Republican lawmakers propose legislation that would encourage nano-technology in our state. The Nano-STEM Initiative will have a dramatic effect on the expansion and growth of the Chippewa Valley, so says State Senator Ted Kanavas (R-Brookfield). The Initiative will provide appropriations to the University of Wisconsin-Eau Claire, UW-Stout and the Chippewa Valley Technical College, encouraging their cooperative effort to progress in nanotechnology. "The initiative was meant to help jump-start a cooperative agreement between these institutions in an effort to attract business, help entrepreneurs take their ideas to market and retool new and existing workforce in the Chippewa Valley."

That would cost between $3-4 million in the biennium. Kanavas says the NanoSTEM Initiative provides an enormous opportunity for Wisconsin. "We're very fortunate to have these folks with us and in our state. It will give us a competitive advantage not only in the Midwest but all over the world as we look at new innovative products and new industries as they're going to be formed in the Chippewa Valley."

UW-Stout Dean Robert Meyer says it's a great way to keep college students in the area after their graduation. "We see this really as a 'brain gain' opportunity for western Wisconsin as opposed to a 'brain drain' opportunity."

Kanavas says the Nano-STEM Initiative is a set of two bills, the 2nd is the nano-technology tax credit, providing 2.5 million bucks in tax credits over the biennium to provide incentive for more investment in nanotechnology. UW-Eau Claire Chancellor Brian Levin-Stankevich says there are many examples of companies that have either moved to, remained, or grew in that region because of the early investment in nano-technology. The new initiative would encourage their efforts.