You are here: Home / Military / Soldiers reunite with families 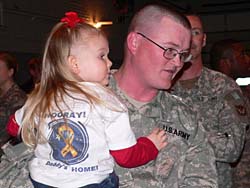 Several Wisconsin troops return home after serving in the Middle East. The Wisconsin Army National Guard's 232nd Military Intelligence Company arrives at the Air National Guard base in Madison with live music, senior officials in the Guard and Governor Jim Doyle. "I had the chance just about exactly a year ago to be in Bagram and in Kabul. I was there for two days and I was happy to leave after two days, so for those of you who have been there for over a year, I just stand in awe for what you've done."

The soldiers and their families were thrilled to be reunited. "We're very excited. We're very happy. We feel blessed everyone's safe." Mary Scace's husband Darrell is back home, about 20 pounds lighter.

The couple has two young daughters, the youngest is just over a year old. "She was ten days old when I first left," says Darrell, "so I missed a lot of the last 14 months of growing up."

The unit's 30 Madison-based soldiers spent more than 14 months on active duty, including nearly a year in Afghanistan. Specialist Steven Holvenstot missed many comforts of home. "The good milk, cheese, sausage … being able to go out bowling with my friends, microbreweries, school." He says he'll celebrate a belated Christmas with his family.

Captain Jamie Makowski has her eye on a simple pleasure. "I would like to eat in a real restaurant with some real silverware and plates." Makowski was thrilled to meet the governor, but admits she's even happier to see her family.

The mission included intelligence collection, analysis and dissemination. There are now 970 Wisconsin National Guard soldiers and airmen on active duty, of which 930 are deployed overseas.