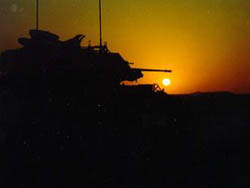 Today is the 2nd annual state of Wisconsin Gulf War Illnesses Recognition Day , on the anniversary of the start of the 1991 Persian Gulf War . Wisconsin is the first state in the nation to observe, recognize and affirm the plight of many Gulf War veterans whose illnesses continue to afflict them 16 years after the end of the war. So says Anthony Hardie , Executive Assistant with the Wisconsin Department of Veterans Affairs . "The scientific research that has been coming out in recent years continues to demonstrate that Gulf War veterans have significant rates of illness above their non-deployed Gulf War era counterparts."

The reasons for what happened to our soldiers are not fully known yet, but Hardie says there are many hypotheses being explored in the scientific community. Although he explains it's no surprise Gulf War veterans came back with health issues immediately upon their return. "Most people that are familiar with the 1991 Persian Gulf War know it was a veritable toxic soup of hazardous exposures."

Hardie, who had been an avid runner, knows first hand about the litany of health issues attributed to the Gulf War. "I was in Kuwait for about two months after the ground war was over and was just awfully excited as a young soldier and a runner to be able to start running again. … Breathed in that black oil well fire smoke … coughed up thick black sputum for about two months while I was there and another month after I was home and I've had chronic respiratory issues ever since."

Fatigue, headaches, muscle pain, gastrointestinal problems, joint pain are just a few of the health issues that could be Gulf War Syndrome , which currently affects as many as one-third of the nearly 700,000 men and women who served in the 1991 Gulf War.