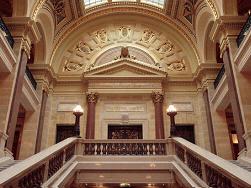 McCabe says the race for state Supreme Court is getting very partisan. It used to be that the legal community donated to the candidates, he says, but now the special interest groups are pushing to get special interest justice.

McCabe says Wisconsin citizens want to know that they'll be treated fairly and impartially, but soon public confidence in the integrity of our judicial system could be seriously eroded, unless we do something about the way Supreme Court races are conducted. “If any citizen, God forbid, ends up in court and has to go before a judge they want to know that that judge is going to be fair and impartial. They want to know that that judge will be accountable only to the law and the constitution and is not accountable to some special interest group or partisan politicians.”

McCabe says the special interest donations will likely lead to conflicts of interest, and more judges will have to consider recusing themselves from cases.

NOTE: Linda Clifford , Annette Ziegler , and Joseph Sommers are all vying for the seat held by retiring Justice Jon Wilcox. The primary is February 20th.