You are here: Home / Politics / Govt / Van Hollen says safety must be a priority 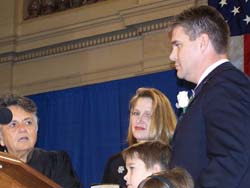 Wisconsin's new Attorney General says safety must not become a victim of partisan politics at the Capitol. With his hand resting on his mother's Bible, Republican J-B Van Hollen took the oath of office Wednesday to become Wisconsin's Attorney General. Van Hollen says he's humbled by the public's trust.

Van Hollen says he's already setting clear goals for his office. He says his first 100 days in office will be focused on laying out his initial plans to fight crime in Wisconsin. Van Hollen is also calling on the governor and lawmakers to work together to address those problems, which include fighting meth production, tracking down sexual predators, and reducing crime in Milwaukee. Van Hollen says partisan politics should not hold up reforms.