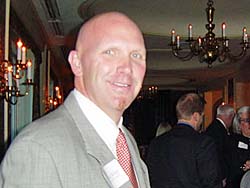 Rick Wiley is leaving his post at The Republican Party of Wisconsin to help out a 2008 presidential hopeful .

After six years with the state party, Executive Director Rick Wiley is set to become the National Deputy Political Director for Rudy Giuliani 's Presidential Exploratory Committee. The field of presidential candidates becomes more crowded by the minute , but Wiley believes Giuliani will stand out because he's got what the public wants. "When you ask someone what they think of Rudy Giuliani, the first response you get from that person is positive. I just saw a poll where 86% of the people said they have a favorable image of Rudy Giuliani. That's something the other candidates do not have. And when you can capture something like that I think you have the recipe for a winning campaign."

Some argue Giuliani could be a tough sell in Iowa. He's an East Coast Republican with liberal values. However, Wiley says people view Giuliani as a leader and that's what this country needs right now. "We're so polarized between the left and the right out there. We need someone who can talk to both sides." He says, "Rudy Giuliani is that person."

As mayor of New York, Wiley says Giuliani cleaned up the streets, dramatically reduced the murder rate, cut taxes, and lowered the amount of welfare recipients, all of which are conservative issues that voters will like. The national campaign headquarters is located in the financial district of lower Manhatten, so Wiley says he'll be moving there very soon and he's already putting together the national staff.