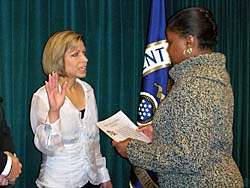 One Wisconsinite gets to work after having recently been appointed by President Bush to help our nation's drug czar. New London resident Camille Solberg has a real passion for outreach and now, as the first Wisconsinite appointed to the Drug Free Community Advisory Commission, she'll work with ten other commissioners from around the country to help advise US Drug Czar John Walters on better ways to decrease and prevent drug use among the youth. "The primary focus of Drug Free Communities obviously is to strengthen the communities support to help our young people to stay free from any type of drugs."

Solberg says local problems need local solutions, so her commission will work with each community in figuring out a strategy to fight methamphetamine and other drug problems, and give them financial support. She says Congress currently appropriates $80-million a year for the war on drugs. "On a community by community basis each group can identify which drugs are presenting the greatest problems in their local areas, such as, you know, now we have this meth use which is quite, quite troublesome."

Solberg says some under-represented communities suffer more than others, and as a Commissioner, she needs to be an advocate for them, including inner cities, minorities, Hispanics, blacks and tribal nations … focusing on kids. "We do focus on youth but we need to help parents understand also the critical role they play as the most influential people in the lives of these children, so it is twofold."

The mother of four says it's a great honor to be selected by the President for this 3-year position. The Commissioners will meet twice a year at the nation's capitol after gathering information throughout the year, including input from the communities. She says with 29 grants currently in operation in Wisconsin, our state is one of the more progressive states in fighting the drug problems.