You are here: Home / News / Concussions force Lawrence out at UW-Green Bay 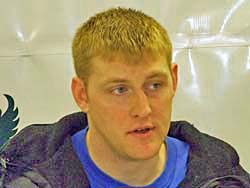 A career that included as many as seven or eight concussions has come to an end for UW-Green Bay senior Josh Lawrence (pictured).  Lawrence informed his teammates of his decision before practice at the Phoenix Sports Center on Tuesday.  Lawrence will remain with the team, attending practices and games.

Lawrence missed time in three of his four seasons at UW-Green Bay and said his concussions date back to high school in Ashton, Illinois.