You are here: Home / Military / Doyle touts GI Bill to hundreds of veterans 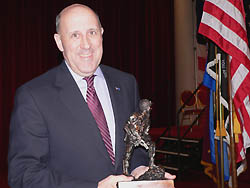 The governor addresses veterans in the capitol city, and calls attention to the new GI Bill .

Speaking to a group of veterans from across the state, Jim Doyle touts his signing of the GI Bill as one of his proudest achievements as governor. "I've signed a lot of legislation — I've vetoed a lot, but I've signed a lot — and I think the bill that made me perhaps the proudest was when I signed the bill granting full tuition remission for veterans at Wisconsins universities…"

Doyle says when you take these good men and women, who've really been tested in the military, and give them a good education, they'll be great leaders for decades to come. Doyle adds, the GI bill is not just about doing something nice for the veterans. "This isn't even just about giving people what they deserve, of course these veterans deserve this. This is about how we make sure that we have great leaders in this state for decades and decades to come."

Speaking of leaders, Doyle thanked Wisconsin Department of Veterans Affairs Secretary John Scocos for taking the best package of veterans benefits in the country and making it even better. That includes the new GI Bill and the Mission Welcome Home project, which reaches out to returning veterans in our state, informing them of the benefits available to them. '

At Tuesday night's "Veterans Salute to the Legislature" in downtown Madison, Doyle became the first governor in our state to receive the Iron Mike award, in recognition of his strong support of our veterans.