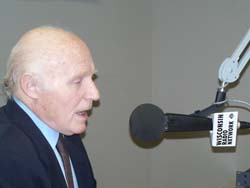 Wisconsin Senator Herb Kohl said it's too bad that Republicans blocked debate on an Iraq war resolution. Senate Democrats had wanted weekend debate on the same resolution which passed the House Friday — indicating a lack of support for President Bush's "troop surge" strategy in Iraq. "Every poll out there indicates that the American people do not support escalating our involvement in Iraq, and the president . . intends to do that," Kohl WRN in an interview Monday. "This president apparently is intent on going his own way," said Kohl. "As he likes to say, 'I'm the decider.'"

The Wisconsin Democrat said the Congress is now saying that it's time for their input, especially in light of the message sent by voters in the November elections, which returned Democrats to control in the House and Senate. "Collectively, we represent the will people in the United States," said Kohl. "On Saturday, unfortunately, we couldn't get permission from the other side to even go to a discussion," of the non binding resolution.

Kohl says whether or not Congress exercises the power of the purse to cut funding for the war is unclear at this time. What is clear, he says, is that the U.S. has learned "to our profound regret and at tremendous cost," that the attempt at nation building in Iraq has not worked.