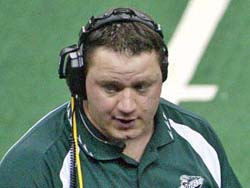 It's Lytle's first head coaching job.  He has served as Green Bay's fullbacks, linebackers and special-teams coach the past two seasons and was instrumental in helping the Blizzard to rankings of 3rd in red zone defense and 4th in scoring defense in 2006.

Lytle played five years in the Arena Football League and was coached by Landsee during four of those seasons.  He takes over a team that finished 9-7 in 2005 and 10-6 last year.  The Blizzard reached ArenaCup 7 last season.

Green Bay opens camp March 10 and will play its first game March 31 at Fort Wayne.  The Blizzard's home opener is April 13 against Manchester.