You are here: Home / Weather / One blizzard down. Another strong storm approaches 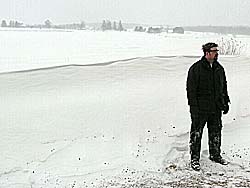 The Blizzard of 2007 is over but another strong system is on the way.

First, in case anyone doubted it, Wisconsin did get hit by a blizzard this past weekend.

Bob McMahon with the National Weather Service in Sullivan says winds were strong enough to be classified a blizzard Saturday night into Sunday. He also says we came close but did not break any two day snowfall records.

And just as we keep digging out, McMahon says another low pressure system is developing that will move into the upper Midwest Wednesday night into Thursday.

But, he says,  it's too early to tell if it will be rain or snow. McMahon says it's something to watch however since it has the potential of becoming a strong storm.

(Picture: Clark County family was stranded and unable to get to work when, not only their driveway but, the main roadway was completely covered in a 3-foot deep snowdrift.)