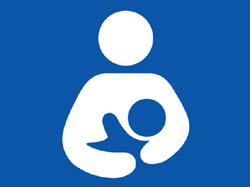 The legislative process is officially underway that would make it illegal for anyone to stare at moms who breast feed in public.

Along with State Senator Fred Risser (D-Madison), State Representative Sheldon Wasserman (D-Milwaukee) is cosponsoring legislation which aims to eliminate discrimination against breastfeeding mothers. “This bill is very important because this bill says that babies have the right for the best nutrition that they can get whenever and however they want to get it.”

It's called the “Right to Breastfeed Act.” The Milwaukee Democrat says the bill would allow a mother to breastfeed her infant in any public place, at anytime. It's not just about hurting someone's feelings. Wasserman, who is also an OB/GYN doctor, says it's the best source of nutrition for the baby. Doctor Wasserman says breastfed babies tend to be healthier babies. “It's better for the children,” he says, “they have lower risk of asthma; lower risk of childhood diseases, including allergies, ear infections; and there are even some studies that actually show they have higher IQs.”

Wasserman says breastfeeding also helps to prevent breast cancer, and as a bonus, it burns calories! … up to 500 a day. Currently, 30 other states have similar laws. A bipartisan group of 28 legislators has signed on in support of the measure.