You are here: Home / Military / Secretary Scocos ordered to Iraq 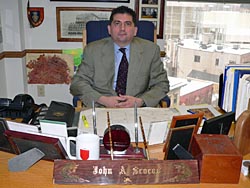 Wisconsin's Veterans Secretary gets orders to go to Iraq.

When your country calls, you give 110% to do the mission you're assigned. That's what Wisconsin Department of Veterans Affairs Secretary John Scocos says, as he gets ready to serve in the Baghdad area in support of Operation Iraqi Freedom . "I look forward to making a contribution, I hope, to serving our country and serving the mission over there and hopefully assisting any of our future veterans over there and what their needs are."

Scocos says he's honored to serve, just as generations before him have served. The secretary will be deployed to the Middle East as a member of the reserve, but he hasn't yet received the specifics of his duty description. Many people are concerned about the potential danger. "Well, I know my wife is, but I mean, I don't think I'm any different than any other military personnel that's serving over there. Part of wearing the uniform and serving is accepting the responsibilities of whatever danger that might go along with it."

Scocos, a colonel in the US Army Reserve, had been on active duty for nine years, and has over 27 years of service. Scocos is the first acting Veterans Secretary in our state ever to be called to active duty. "My staff has told me that I'm the highest ranking state official to be serving in theater, to the best of our knowledge."

Scocos will take a military leave of absence, and could be in Iraq up to a year. Rules in the Veterans Department say that the Deputy Secretary becomes acting secretary in the Secretary's absence. Scocos says he wants to spend as much time as he can with his family before he leaves sometime in April.